A Statement
On Nations, Globalisation and Democratic Governance

During the last thirty years, two evolutions happened in the world. On one side, the biggest firms of the capitalist countries have raised the profit of their business by producing and investing in outside countries and by selling products in new markets. On the other side, large underdeveloped countries have accelerated their development. Globalisation, leaded by capitalist classes, does not mean that all the countries of the world are developing (one of the main laws of capitalism is uneven development, formalized by Lenin) but that a higher level of interdependency among all the countries. Capitalist globalisation has not brought happiness, either. With capitalist globalisation, the world has been expanded economically but has not been changed politically and socially. A lot of financial and economic crisis appeared. And after the recent financial and economic crisis, it is obvious that the governance of globalisation has to be modified. However, the decisions in this direction are very difficult to take.

After the 1980s, and the tendency towards a quite complete economic freedom, new problems appeared. Globalisation has extended the degree of pollution in the world, in the same time that the modes of production and consumption prevailing in the developed capitalist countries were spread out. Globalisation of economies and its consequences on the urban sprawl had negative effects on agricultural economy. It has generated space disequilibrium. It is a process that is difficult to bear by some traditional societies. In addition, present capitalist globalisation, this new shape of imperialism, has raised the level of wealth for some categories and classes of people. But during the last thirty years, if average wealth has risen in the world, some became richer and the most became poorer than before. Globalisation has increased the power of Capital over labour in every country.
Relying on financial unregulated markets, capitalist globalisation has generated highly unbalanced economies and important regional crisis. But so far, the capitalist leaders had always considered the phenomenon as not very important, and its management was mainly remaining in their hands. Solutions for that have not been found in the G20 summit held in the United Kingdoms this year. However, the crisis of 2007-2008 is a new step in the history of the crisis generated by present globalisation. After the global crisis evidently originated by the Anglo-American system of production and finance, it is no longer possible to delay the necessary economic and political evolutions.

A new global governance
Global governance can be defined as the loose management of global processes and problems in the lack of global government. As mentioned previously, globalisation has raised new categories of problems. These problems need decisions and measures. But there is no political institution having the legitimacy for taking them and checking their application. A global democratic and efficient governance instalment will need deep changes in the present economic and political system.
The point is that to day crisis is not only the consequence of deregulation, but also mainly the consequence of capital, as a system, with over exploitation of labour. Crisis is the consequence of Capital, as a social relationship, and not just the result of a bad management of Capital. It is therefore understandable that capitalist leaders are reluctant to change anything in their previous behaviour.
A lot of rules, however, have to be reconsidered. It is significant that, after the chief governments of the main capitalist countries understood that a huge economic crisis was going on, they gathered (15th of November 2008) the G20 group and not the G8. But at that meeting, China was the only country to present a plan able to stimulate world economy (470 billion euros). It is now a common place to say that the global governance has to be enlarged. But the powerful capitalist nations are not ready to give up their privileges.

Some problems to discuss

The present practice of global governance brings problems that the WAPE has to clarify, for understanding why the process of democratic governance is so difficult to shape. Let us mention three of these problems.
1) In the present world, nations have not disappeared. Nations are independent. In that situation, the most powerful are the biggest and the richest ones. How global rules can be applied to independent nations, so unequal? What about the average and the poor nations?
2) According to the main capitalist leaders, the goals of governance should be only to struggle against terrorism, to limit pollution and the changing of climate, to improve prudential rules concerning financial markets. But what can be the real goals of global governance if the roots of the problems, which, for us, are evidently capitalism, are not neutralised?
3) The present crisis shows that capitalism is not that perfect solution that some people, after 1990, where shouting it was. Is global governance able to change this dominant system? Is it the role of governance to do that?
In that uncertain context, the design of global governance is going to be the result of contradictory strategies to reshape the world. Global governance should mean, however, that global problems have to be treated more peacefully and with more efficiency than in the previous centuries. It is necessary to get not only a democratic, fair but also a peaceful globalisation. 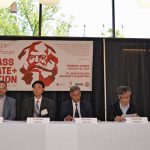